“It is better to be roughly right than precisely wrong. ”

In the early 1910s, the US military used maps of the Alsace-Lorraine and Champagne regions in France as part of its training programme. Critics however contested that it was spurious for the US Army to base their training on those areas rather than US territories, where they were more likely to fight a war. And so the military changed their training maps to ones on US soil. Then, around two years after the change was made, WW1 began and the US military was deployed to fight in Alsace-Lorraine!

Former army general and 34th US president Dwight Eisenhower later cited this story to illustrate an important lesson on planning, noting ‘I tell this story to illustrate the truth of the statement I heard long ago in the Army: plans are worthless, but planning is everything. There is a very great distinction because when you are planning for an emergency, you must start with this one thing: the very definition of “emergency” is that it is unexpected. Therefore it is not going to happen the way you are planning. So, the first thing you do is to take all the plans off the top shelf and throw them out the window and start once more. But if you haven’t been planning, you can’t start to work, intelligently at least. That is the reason it is so important to plan, to keep yourselves steeped in the character of the problem that you may one day be called upon to solve–or to help to solve.’

Retirement planning is in some respects similar to preparing for battle. While in retirement planning, lives may not be in danger, both do have in common the goal of seeking to maintain independence and dignity. And in retirement the enemy isn’t military aggression, but aggressive inflation, poor sequences of returns and outliving your money.

Our previous story illustrates the problem with focusing on a single-line projection in retirement planning. The fundamental problem is that using straight-line projection creates an illusion of precision, and gives an impression that there is only one plausible outcome. In reality, the exact future outcome is unknown and unknowable. So it’s important that we consider a wide range of plausible scenarios.

Reasons why straight-line-projections are woefully inadequate when illustrating sustainability of income in retirement include the following:

Randomness and mean-reversion are key properties of the capital markets. Straight-line cashflow fails to capture these properties. It ignores the impact of volatility, return sequence and the bull/bear cycle that is characteristic of capital markets. Instead, it assumes that return and inflation exist in a linear, predictable way.

Accordingly, straight-line cashflow projections are a misrepresentation of capital markets, inflation, and longevity. Those retirement risks by their very nature are probabilistic, not deterministic. So straight-line cashflow models (to quote Eisenhower) are incapable of keeping you steeped in the character of the problem you may one day be called upon to solve. And as Eisenhower professed, planning is about preparing from the unexpected, which deterministic cashflow models fail to achieve.

Take James, 65 for instance. James wants an income of £50,000 (adjusted for inflation) to be taken annually from his £1m portfolio, which is at present invested in a 50⁄50 global equity/bond portfolio.

A 50⁄50 global portfolio experienced an average return of 8.9% and volatility of 12% between 1900 and 2016. During the same period, average inflation was 4%. Assuming 2% p.a. fees, using a straight-line cashflow suggests that withdrawal of £50,000pa from a £1million is sustainable. 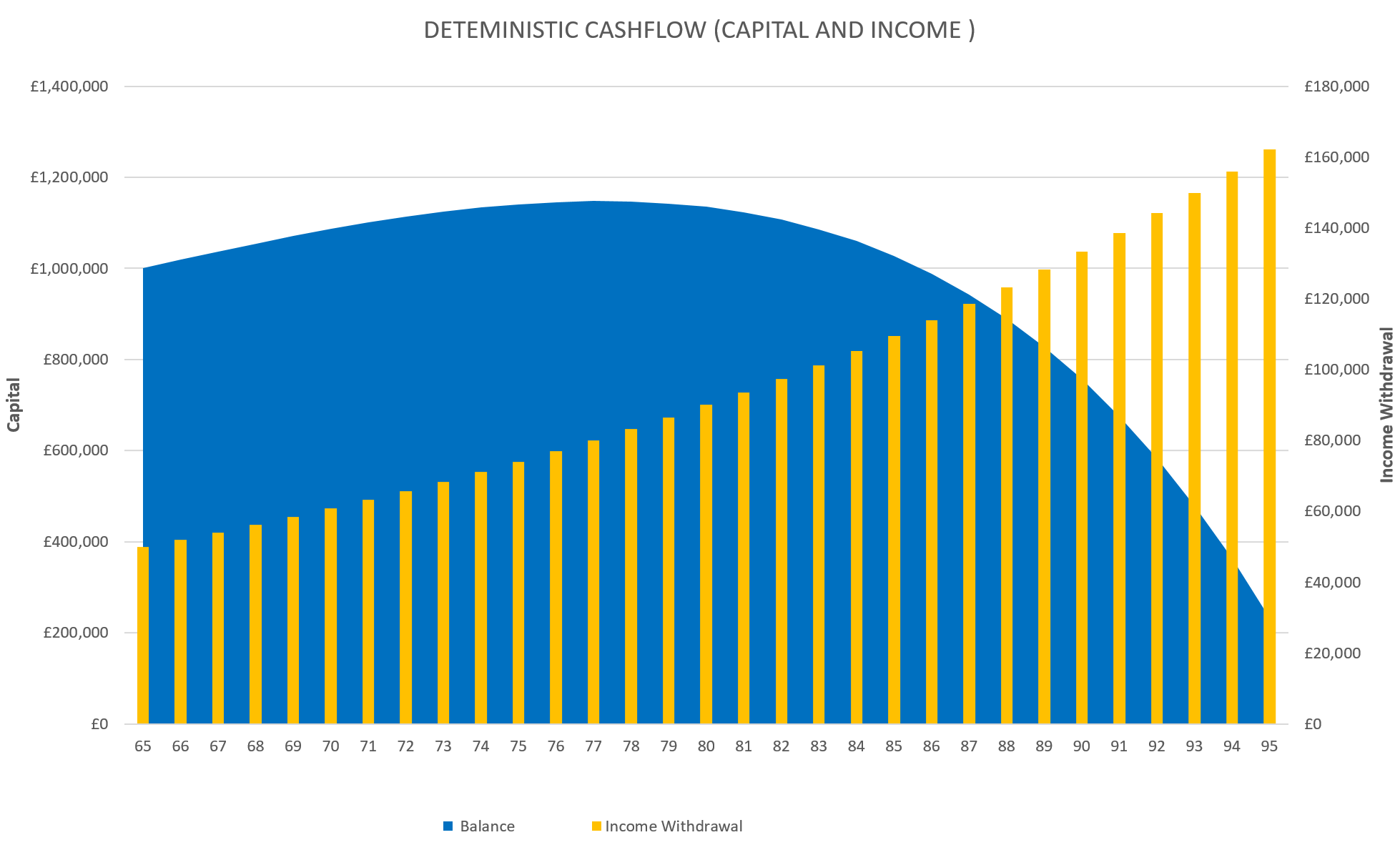 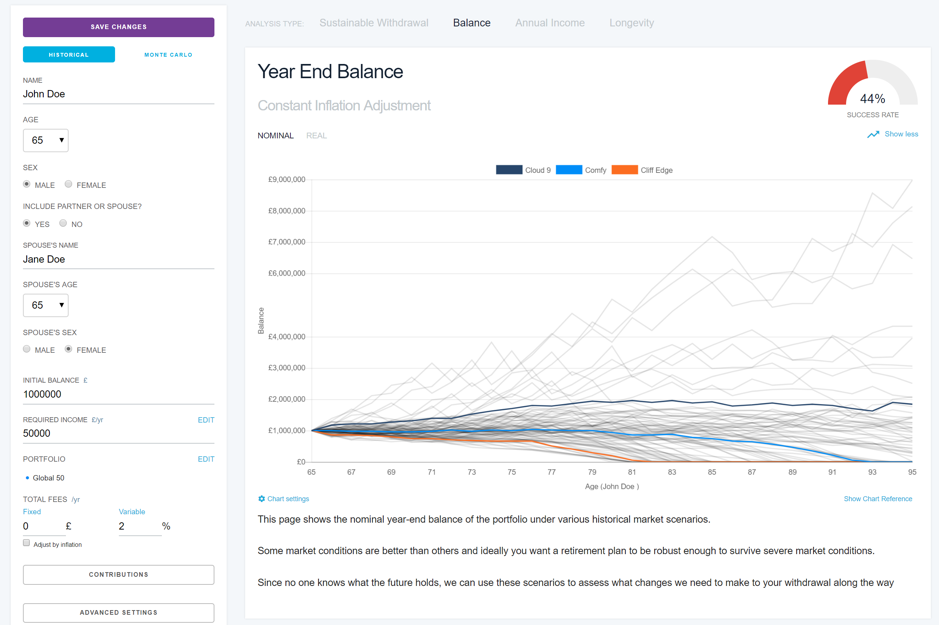 If we accept that the future is unknown and unknowable, the only reasonable way to consider outcomes is to think in terms of the probability. Not only does my straight-line cashflow not capture extreme circumstances, it also fails to appropriately set expectations about the likelihood of success.

Brute force historical data tells us that the odds are against James, while deterministic cashflow models suggest all will be well.

One way that planners attempt to overcome the weaknesses of deterministic cash-flow projections is to use lower returns than the historical average for the portfolio they recommend, but this is often accompanied by lower inflation and so the moderating effect is cancelled out.

Planners may also to build in a market decline in the first or second year of the plan. This isn’t particularly meaningful because it isn’t remotely close to how bull and bear markets work.

‘What if the capital market declines by say, 20% in the first year of retirement?’ is a useful question. But one without context. Where is the 20% figure derived from?

Since 1926, the global 60⁄40 portfolio witnessed a decline of 10% or more on thirteen occasions, including 5 declines of a 20% or more! The average drawdown was a 27% decline, which took 1.3 years to recover, whilst some declines reached as high as 37% and took 3 years to recover. Which poses the question: How do you model these sorts of scenarios with a straight-line cashflow projection?

Additionally, showing a 20% decline but ignoring the likely rebound is equally fallacious. Historical data shows us that bear markets are followed by bull markets. But second guessing the depth and the duration of each bull or bear market is a fool’s errand.

It is impossible to consider a wide-range of what-if scenarios with a deterministic cashflow, so you’re limited to considering only a handful of scenarios at best. The point here is that just dropping a 20% or 30% decline in a client’s plan doesn’t provide any meaningful information.

‘What if’ scenarios aren’t particularly meaningful unless we can contemplate the adjustments that the client would be required to make to keep their plan on the right track.

Instead of just saying ‘if the market tanks 20%, then you risk running out of money sooner’, we can discuss what kind of adjustment we’ll need to make during market declines. What a client wants to know is, what is kind of market conditions could ruin their plan and what kind of adjustments will they need to get back on track.

Will a 5% or 10% reduction in their income will be enough? Or is it sufficient to just avoid increasing their withdrawal in line with inflation for a few years? What specific actions will take to get back on track? These are in essence the virtues of using historical data to illustrate how rule-based withdrawal strategies fare under a wide range of market conditions, in a way that is impossible with straight-line projection.

In the 120 years of data we encounter multiple bull and bear markets, two World Wars, recessions, depressions and aggressive inflationary environments, which build versatility into the model. Alternatively, we can use Monte Carlo simulations to generate thousands of plausible scenarios to assess the impact of severe market conditions on on the client’s retirement plan.

And so to once again refer to the words of Eisenhower, in doing so we strive to keep ourselves steeped in the character of the problem that we may one day be called upon to solve-or to help to solve. This is the very essence of planning.