American writer Mark Twain was reported to have accurately predicted his own death. He apparently based his prediction on the astronomical phenomenon that marked his birth, the appearance of Halley’s Comet. A year before his death, Twain said:

‘I came in with Halley’s Comet in 1835. It is coming again next year, and I expect to go out with it. It will be the greatest disappointment of my life if I don’t go out with Halley’s Comet. The Almighty has said, no doubt: “Now here are these two unaccountable freaks; they came in together, they must go out together.’

Twain died of a heart attack in April 1910, just as Halley’s Comet was visible.

Few financial planners could lay claim to Twain’s sense of humour or literary prowess. Or his prescience.

Most financial planners recognise that basing a retirement income plan on the typical life expectancy doesn’t cut it. This is due to the simple fact that clients of financial advisers are wealthier and therefore far more likely to live longer than the average.

The reasoning is that it’s better to be safe than sorry and plan to an age that a client is unlikely to survive until. But this approach can be problematic. It’s not just because the current age and sex of the client has an impact on their chances of living until an older age, it’s also due to the differences between planning for a couple or a single person.

The chart below illustrates one of the factors — relationship status. The chart shows the probability that a 65-year-old individual or couple would live until any age up to 100. 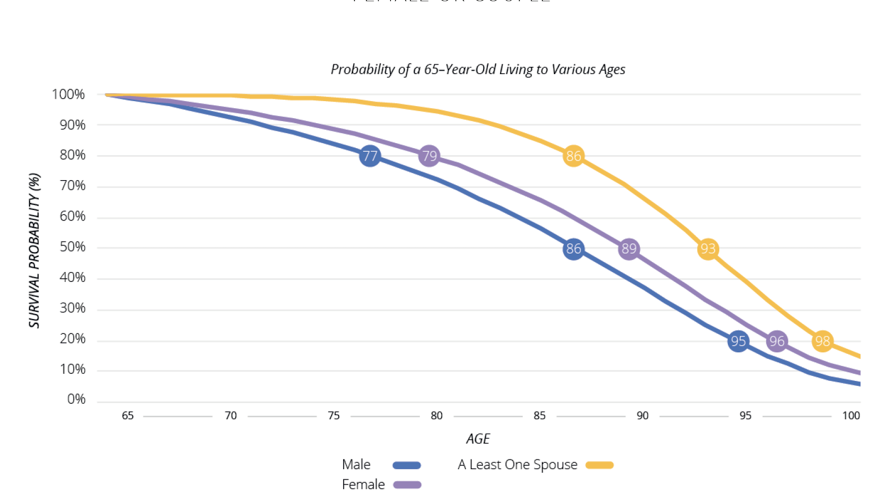 While there’s only a 20% chance that 65-year-old John Doe will survive to their 95th birthday, that chance rises to 25% for 65-year-old Jane Doe. And it’s a whopping 40% chance that either member of the couple will survive. Accordingly, age 95 might be a reasonable age to plan to for John, but it’s certainly not reasonable for a couple of the same age. And it gets worse when you consider age differences between couples.

So, this leads us down a path that avoids a static longevity assumption for all clients. It has to change depending on the age, sex and relationship status. This can get very messy and becomes hard for a planner to evidence how the longevity assumption is made for each client.

To The Rescue: Cohort Survival Probability

A far more robust way to address this is to use survival probability. This allows us to base our longevity assumption, not on a fixed arbitrary age, but on an age which the individual or couple only has a 5% to 10% chance of living to. This means that we would use a different age for different clients, based on the age, sex and relationship status, but that age is anchored in a predefined survival probability. The implication is that, regardless of the client, we are always going to be planning for the tail end of the longevity risk. The goal is to make an assumption, based on data, while avoiding the illusion of precision.

As noted by the ONS, the cohort life table takes into account observed and projected improvements in mortality for the cohort throughout its lifetime. Cohort figures are therefore regarded as a more appropriate measure of how long a person of a given age would be expected to live than the alternative measure, known as period life expectancy, which is calculated using mortality rates for a fixed period in time.

John Doe is a 65-year-old single male in relative good health. As we are only planning for John, Timeline recognises that the life expectancy is 88, and defaults our longevity assumptions to age 99. This is the age that John only has a 10% chance of living to. 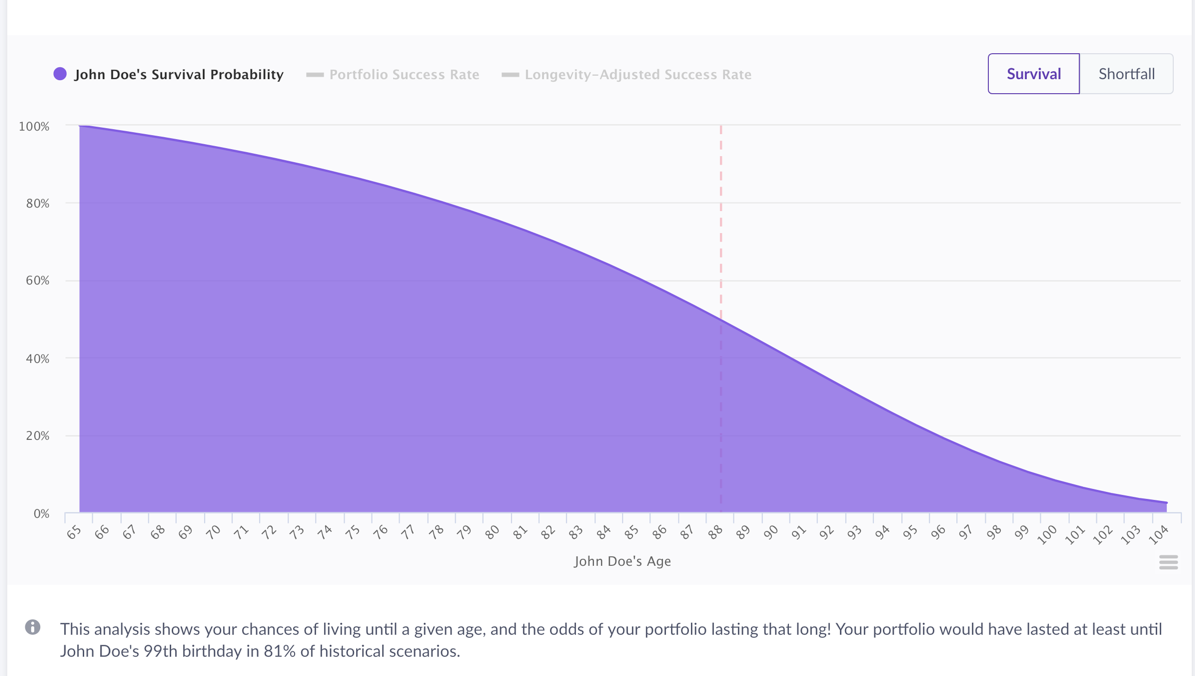 But imagine another scenario where John is married to Jan, who is 63. What should our longevity assumption be? Timeline recognises that the joint life expectancy (last death) is Jane’s 94th birthday (John’s 96th) and defaults our planning horizon to Jane’s 103rd birthday. 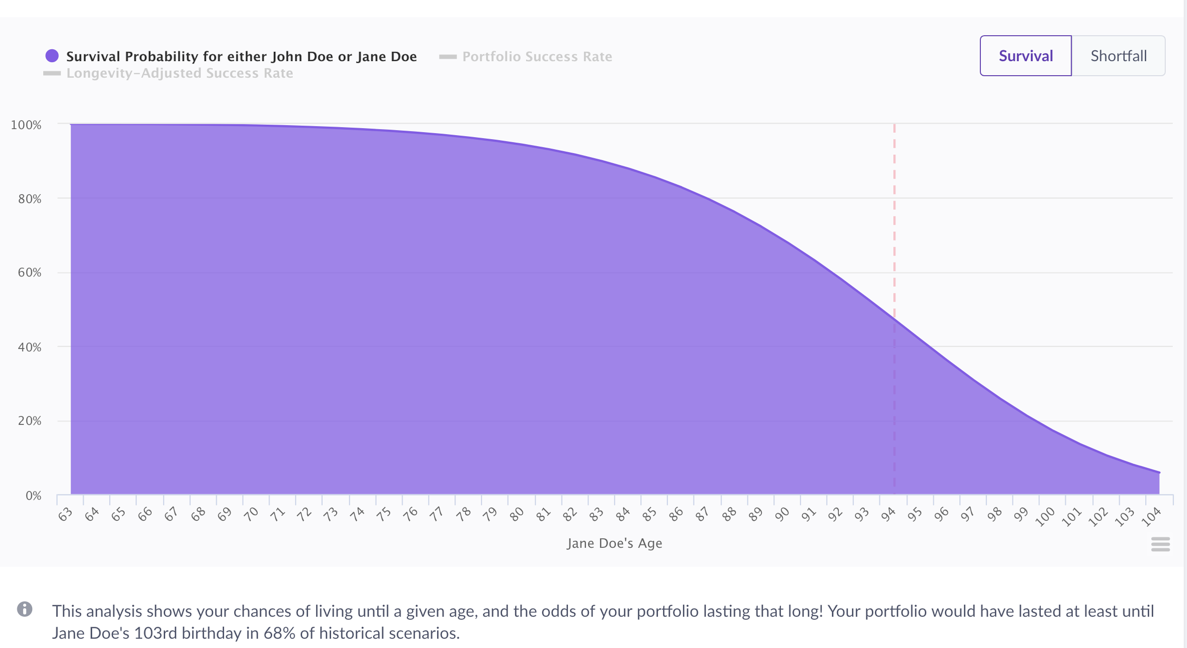 Accounting for these factors increases our planning horizon by six years; four years for the joint survival rate and two years for the age difference between the couple.

The implication is that we have different retirement timescales for different clients, but it’s all anchored on the 10% survival probability.

What’s more, retirement planning is not a one-off event. We have to update our planning horizon regularly.

As the client gets older, the chances of surviving to an older age increases. This means by anchoring our longevity assumption on the 10% survival probability, we are always going to be planning to an age that the client only has a one in 10 chance of surviving to. However, because we already started the retirement journey planning for the right tail using cohort data, there won’t be a drastic change in our time horizon from year to year.

Accounting for health and lifestyle etc

Of course, there are other factors that one could account for in making these assumptions: health and lifestyle, smoking status and post code. Technically, this is possible using the ONS data for low/high life expectancy variants for different regions. But we are danger of spurious accuracy here.

In a sense, these metrics are already baked into the survival probability for cohort life projections. Suppose we start with one hundred 65-year-old males; those likely to survive the age specified by the 10% cohort survival probability are the healthier, more educated and non-smoking members of the group. They are by definition, the members of the group who live longer.

The weakness of this approach is that it penalises those advised clients with shorter lifespans. Wouldn’t it be nice if we had a crystal ball? But alas, we are planners, not soothsayers.