Financial Planners Versus Financial Advisers: Are Households better off?

There appears to be a dearth in empirical evidence on decision-making for households with financial advisers. This is possibly because most of the empirical evidence is investment focused and ignores issues like savings rates and life insurance. Financial planners are also not acknowledged for the role they play in a customer’s retirement journey and get lumped with “financial advisers” in general empirical research.

The research, which is based on the survey of consumer finances (between 2001 and 2016), explores how household decision making in five categories (saving habits, emergency savings, life insurance coverage, portfolio risk level and revolving credit balances) compares across transactional financial advisers, financial planners, friends and the internet as sources of information.

Financial advice and financial advisers differ, so the expectation that the value of advice would be the same is not necessarily true. Also, because the research doesn’t control for the type of advice given, the results could be potentially biased. Financial advisers do have the potential to add value. From an investment perspective, investors could be worse off by the disposition effect. This effect can be mitigated by financial advisers, by making their clients aware of its existence or by the adviser taking discretion of the account.

Households with financial advisers tend to have higher incomes, be older, more educated and more financially literate. They also have a higher tolerance for risk. Being financially savvy is also seen as a determinant for very good financial planning. So, from an empirical perspective, controlling for the demographics of the household played an important part in the research. The empirical benefit associated with working with a financial adviser was hard to identify, because it’s not random and is potentially endogenous to the outcome variable being considered. For example, a financially savvy individual decides to hire a financial adviser to help make better financial decisions. How do we then distinguish what the impact would have been had the adviser not been hired? (Correlation does not imply causation).

Apart from investment areas, there’s also empirical evidence and theoretical research that has explored the benefits of financial advice in areas such as life insurance, debt management, tax assessment and emergency fund management. This empirical research suggests financial planners could help clients focus on long-term goals by reducing the concern in the short-term about volatile markets. Working with financial planners also helps to improve savings and financial habits.

It should be noted that most of this research doesn’t control for selection bias. Some of the research which controlled for simultaneity bias and reverse causation found no statistically significant difference in self-reported retirement savings or short-term growth in retirement account asset values for those using a financial adviser. Meeting with a financial adviser is however associated with calculating retirement needs, setting long-term goals, retirement account diversification, retirement confidence and higher levels of savings in emergency funds. (However, the empirical evidence on the value of working with a financial adviser is weak for many reasons – e.g., identification, misaligned incentives and lack of general ability).

If we consider incentives as an example, depending on the areas explored, some of the research has suggested that fee sharing alters the incentives of brokers and could be harmful to investors when their incentives are not aligned with those of their clients. 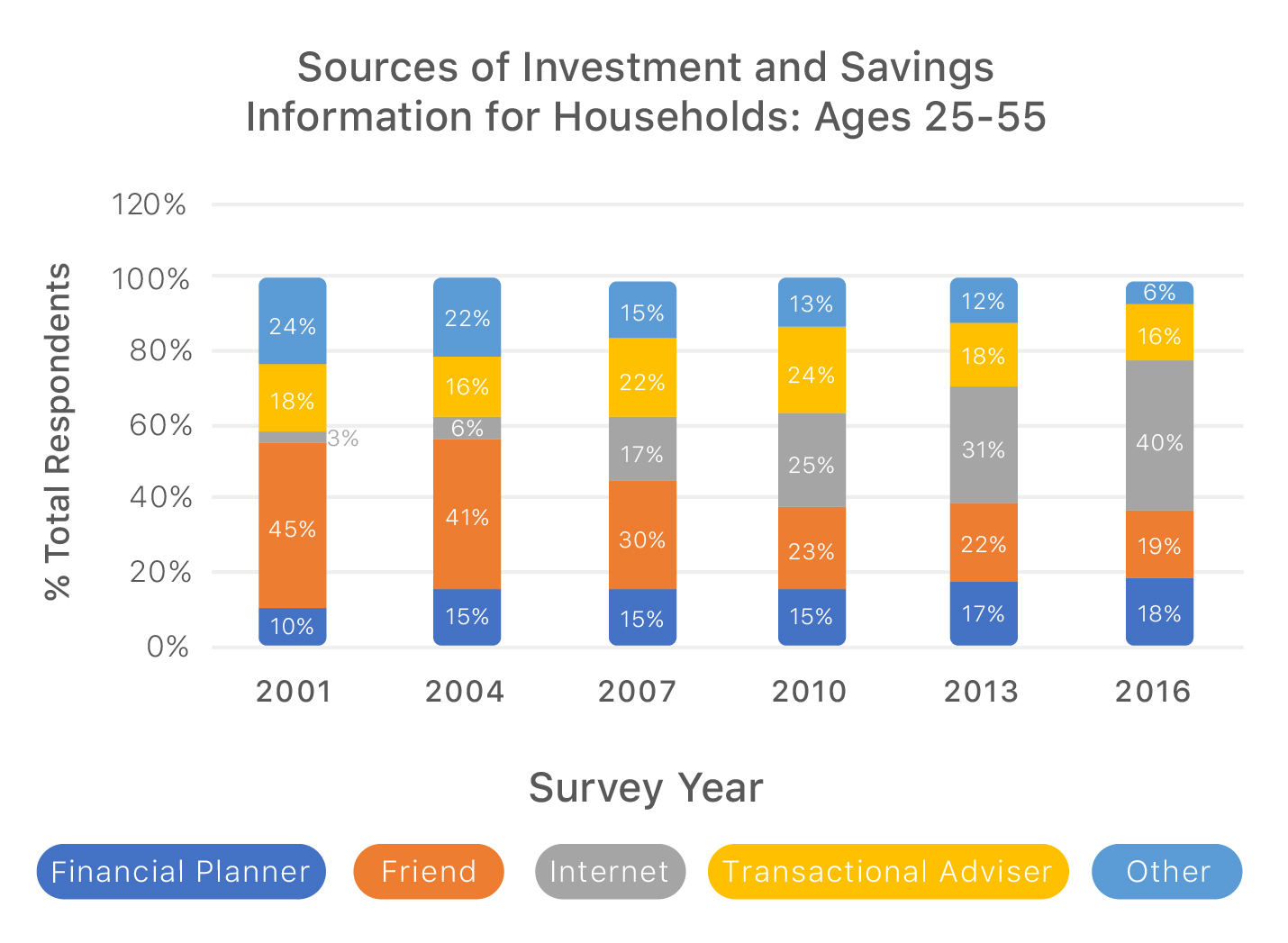 From the chart, the internet appears to be overtaking the “friends” and “other” sources of financial information since 2001. The suggestion is that households who may have asked a (relatively unsophisticated) friend a financial question previously are increasingly going online to find answers to their financial questions. Internet usage growth has been relatively the same across age groups in this dataset.

Establishing if households make sound financial decisions is subjective. The analysis in the research focused more on the decisions of households (the process), versus more outcome-oriented variables (such as wealth/savings levels). By focusing on household decisions, the potential issues associated with reverse causality were reduced. This is because clients with more wealth become appealing to financial advisers and it then becomes difficult to determine the financial adviser’s role regarding wealth creation. Also, having more wealth doesn’t inevitably mean the household makes optimal financial planning decisions.

The survey was limited to households that were assumed to be interested in considering financial advice, as well as those that would consider guidance among the five areas under consideration. For inclusion, respondents must have been between ages 25 and 55, the household must have had at least $5,000 in financial assets and retirement assets (these assets are not mutually exclusive), the household had to have wage income and normal wage income above $25,000 annually (again, these definitions are not mutually exclusive). These filters created a dataset not representative of the entire U.S. population, but reflected a group of investors who would potentially be interested in working with a financial adviser.

On savings, the analysis was focused on the household having a savings plan in place. For this analysis, once the household had some type of savings plan, it was regarded as having good savings habits. The focus was “savings habits” and not “the amount of savings” in order to simplify the study. The other three areas – insurance, credit card debt and emergency savings – explored having face-value life insurance at least equal to total wage income of household, have revolving credit card debt at the end of the month and having adequate emergency savings respectively.

Each household in the SCF had five observations. Each of the five tests were conducted for each observation resulting in 25 total tests for a household. To get a “pass rate” for each area, the results of the test for each observation were combined. Pass rates ranged from 0% - 100%. Scores at the individual area levels were then averaged to get the total financial soundness score for the household. Control variables (for example total financial assets) were also created using observation weights to make each household have a single set of values.

Most of the tests (except for “savings habits”) had approximately a 50% pass rate. To ensure dispersion in each domain across households (that is, households were not passing or failing for a given domain) was somewhat intentional. That only approximately half of households passed each test suggests there’s a large potential benefit for financial advisers to help households make better financial decisions.