A 90-year old woman called Jeanne Louise Calment once lived in the South of France. The year was 1965. A 47-year-old lawyer offered to pay her 2,500 francs (then about $500) a month, for the apartment she lived in until she died. The condition was that she’d leave him the apartment in her will.

He liked the apartment and was convinced this was a safe bet. What would go wrong? At the age of 90, how much longer did she have left to live? Well, 30 years longer, that’s how much!

The woman eventually passed away 32 years after she’d entered into this agreement with him. And the lawyer? Not only did he die two years before her (he was 77), his estate ended up paying her more than $180,000 - three times the value of the apartment.

On her 120th birthday, two years before she died, when asked what she thought about outliving the man who assumed he would only pay her for a short period and eventually inherit her apartment, the old lady joked and replied: ‘we all make bad deals in life’.

Life expectancies are improving. We’ve witnessed governments and private enterprises over the years try to manage the tricky balance of making pension payments to retirees for longer and not becoming overly indebted themselves.

Governments have increased the pension age, while most organisations have done away with final salary schemes and transferred the investment risk to their employees instead. For them, this is the logical way to manage the risk of not being able to fulfil their pension obligations.

In retirement, longevity is just as important as investment risk. Giving little or no thought to this aspect of the planning process could be costly. I’ll illustrate this point with two quick examples of longevity risk below.

The first example shows a 65-year old male invested in a £1m ISA and an annual income of £40,000 invested in a balanced portfolio with no taxes or fees. At a survival probability of 50%, his portfolio has a 100% chance of lasting until he reaches age 86 in the 10th percentile of historical scenarios. 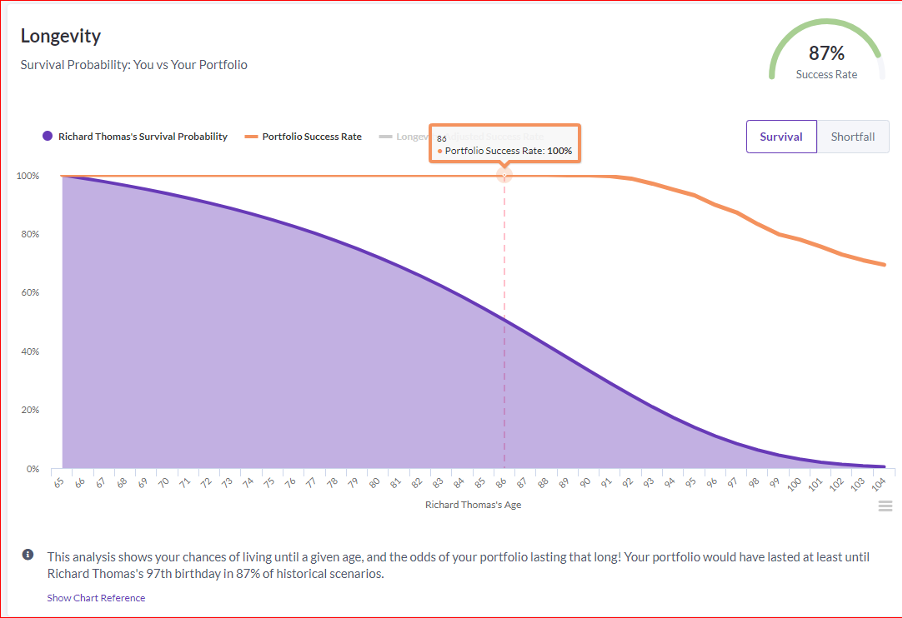 If we consider a more unlikely (but possible) scenario, where he only has 1 in 0 chance of surviving till the age of around 97, then his portfolio’s success rate becomes 87%. Not entirely bad; but, we’re using a very simple illustration here, so numbers will start to change once we account for different account types, taxes, fees, portfolio balance, income needs, etc.

If we use the same assumptions above but add two other taxable accounts, each will be a 1% fee, in addition to the ISA, the success rate drops to 47%. And, the portfolio has a shortfall rate of 53% in the 10th percentile of historical scenarios. In this third example, the portfolio lasts until he’s 87, and he has a 10-year shortfall. 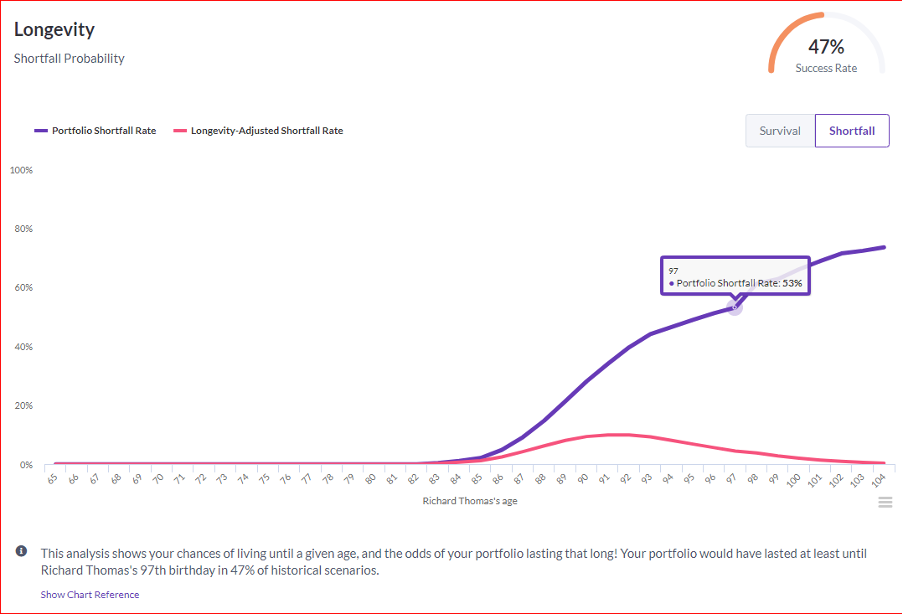 What are the odds of surviving till the age of 97? And, does it really matter if we don’t plan for this long? As I pointed out previously, people tend to live longer than the average, so it seems sensible to plan for longer life expectancies when thinking about retirement.

This sounds like I’m stating the obvious, but it’s interesting to observe that we tend to think about longevity risk by referring to average life expectancies. So, what happens if you end up planning for your client by building their plan or anchoring their expectations on the average life expectancy, and they end up living longer than this?

Retirement is meant to be a pleasant experience, and we should all look forward to it. Longevity risk is also an integral part of retirement planning. just as we do with investment risk, we should ask ourselves the question ‘what could go wrong?’ And, in this context, we should remember that the client could well live longer than we originally planned for, consider the extreme scenarios and plan for them accordingly.