The 4% percent rule as created by Bill Bengen was  never intended to be Newton’s Fourth Law of Motion that the industry makes it out to be. Instead, it’s more of a framework that needs to be applied to each retiree’s individual circumstance - spending needs, asset allocation, time horizon and fees.

The latest incarnation of this, is a paper by the actuaries at LCP titled ‘When QE broke the 4% rule’, in which the authors argue:

‘A common benchmark for withdrawal strategies: the “4% rule” can no longer be assumed to work reliably in today’s environment.

The game has changed. Setting a spending level and indexing that withdrawal to inflation is a tougher investment challenge than ever in a world of zero (or negative) real interest rates.

Quantitative Easing (QE) and low interest rates have changed the game for investing in retirement in the last decade, and have made this job much harder. A spending rate that was sustainable for a retiree 10 years ago can no longer be considered sustainable. Rules need updating.

The effect of lower interest rates mean that common retirement spending rules are 3x more likely to lead to failure. Spending would need to be slashed by a quarter on average to get back to the sustainability levels seen a decade or more ago.

_The best example of this is gilts, once a staple of retirement portfolios. Current gilts have a real yield (relative to inflation) of -2% p.a. Add to this typical private wealth / IFA fees of c2% this creates an annual 4% loss relative to inflation. This means that over a typical 23-year retirement an investment in gilts would be expected to lose 60% of its real value after inflation and fees.’_

The principle point they’re making is that the 4% rule is no longer sustainable because of today’s negative bond yield.

First, we’ve written about the how the 4% rule stacks up for an investor in different countries before. It was never meant to apply blindly to investors in the UK or any other countries before. Once you adjust the time horizon, asset allocation, fees and inflation in each country, the answer varies significantly.

In Bengen’s original paper, the 4% rule was based on the worst historical case scenario in the last 100 years for a 50⁄50 US Equity/Bond portfolio.

If you replicate the framework for a UK investor with 50⁄50 portfolio, paying 1% in fees, the 4%  rule only has a 70% success rate for a 30-year retirement period! 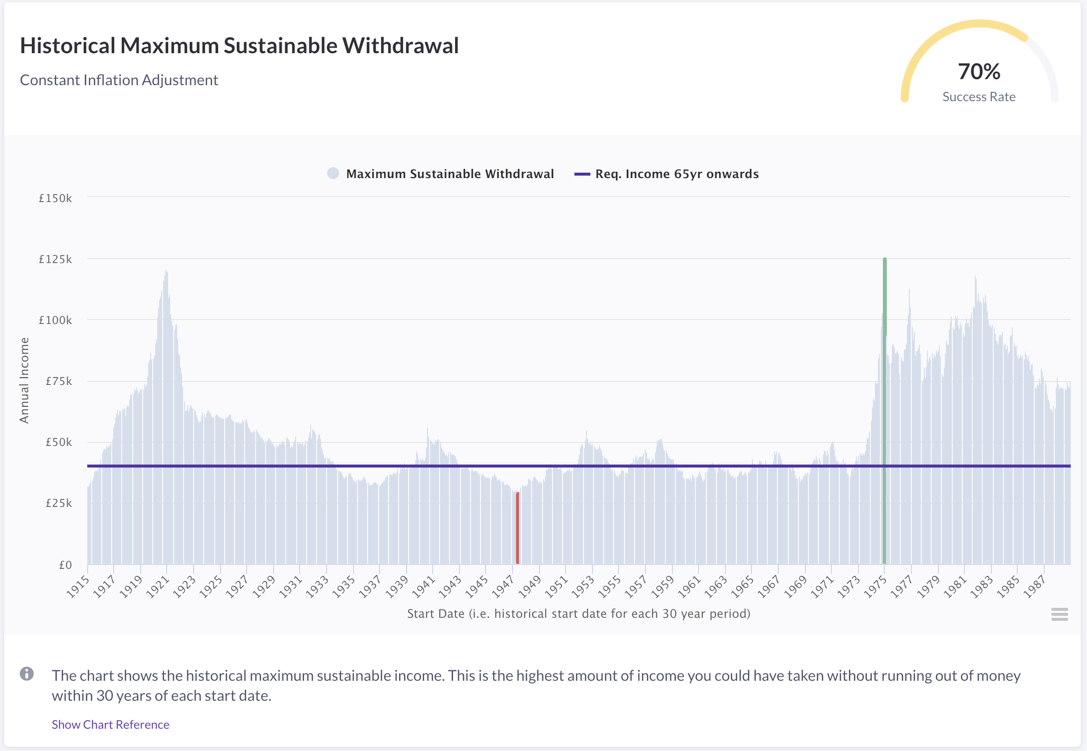 So the 4% rule never really applied to UK investors to start with.

Second, the assertion that the negative real bond yield environment is unprecedented is patently false. The table below shows the inflation-adjusted annualised yield for every monthly rolling period since 1900 for US and UK 10-year Bonds. 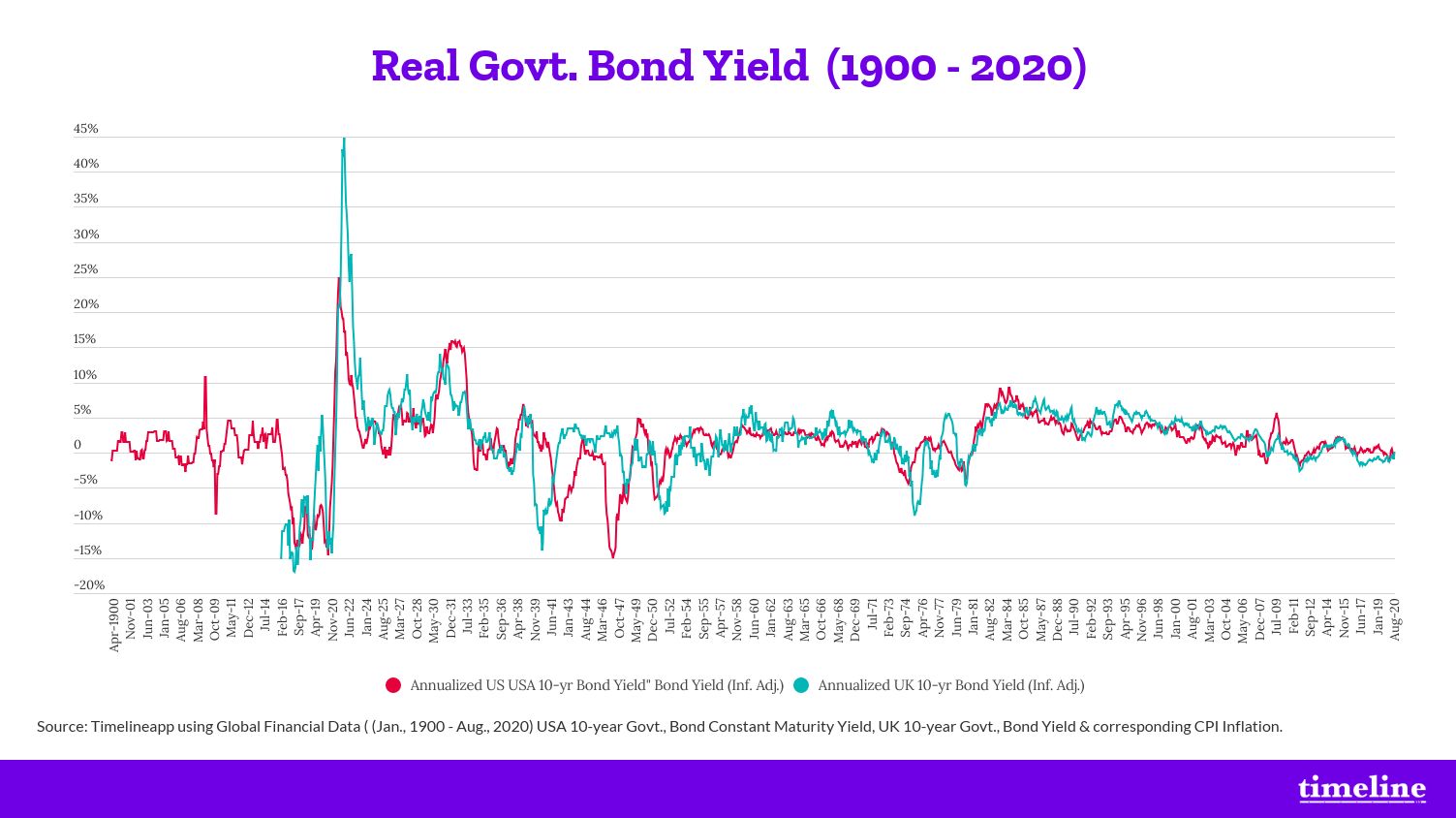 The data shows that the assertion that real bond yield is unprecedented in history is inaccurate. The UK and indeed the US have recorded real negative bond yields in the past, notably in the late 1910s, some parts of 1940s and 50s, and again in 1970s.

Nominal bond yield might have been higher than they are today, but once you adjust for CPI inflation, the current negative yield environment isn’t unprecedented.

Anyone with a half decent understanding of history should know of periods of double-digit inflation.

So, when you put that in context of historical data over the last 100 years, the current real bond yield is actually not that bad. And, one thing that today’s retirees have going for them is that the low bond yield is accompanied by low inflation.

The third and final point is, much of the alarmist claims about today’s bond yields and the likely impact on Sustainable Withdrawal Rate is wrong headed. This is because, the SWR framework is specifically designed for this in the first place. As in noted in Beyond The 4% Rule;

We often hear that the so-called ‘bond bubble’ is about to burst. Some argue that this makes the sustainable withdrawal rate framework unlikely to hold up in the future. But the real question is, is a downturn likely to be as bad as some of the worst bond returns in history?

The reality is that large losses on bonds are actually a fairly common occurrence. The SWR framework has survived periods of multiple negative double-digit bond returns. That’s what it’s been designed to do.

_According to Professor Elroy Dimson, UK bond investors lost half their wealth in real terms in the inflationary period from 1972 to 1974! In the period between 1914 and 1920, UK bonds lost over 60% in real terms over seven consecutive years. But the SWR framework would have held its own during this period.’_

This chart below shows some of the worst calendar year real returns for UK bonds. I have no idea what future bond returns will look like but I’m going to wager they won’t be much worse than some of these. 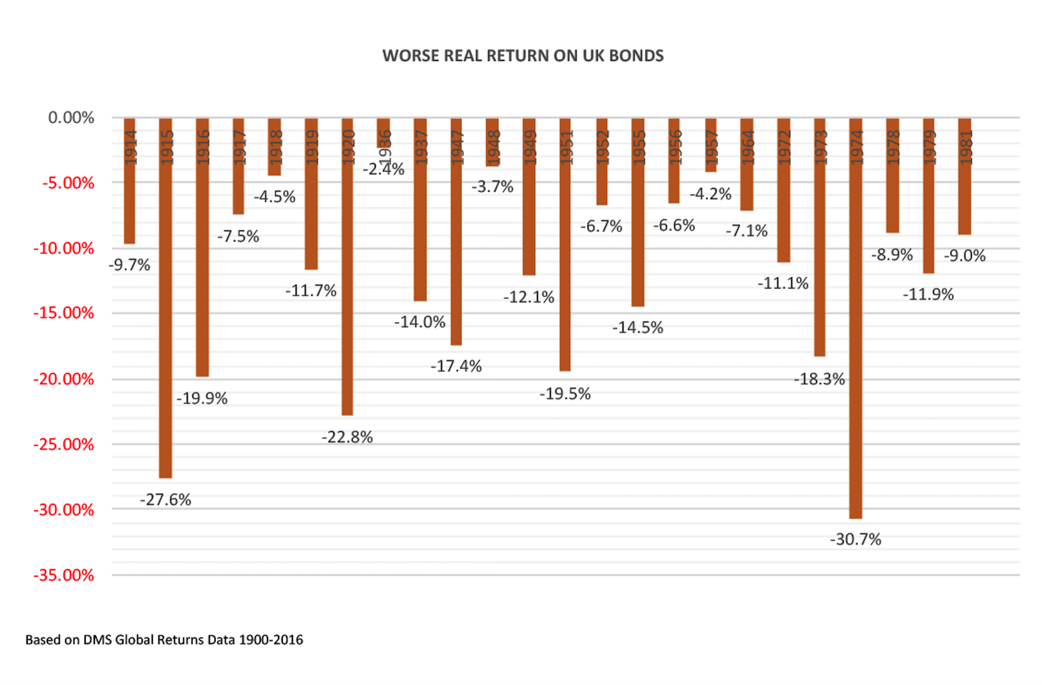 The latest bout of low bond yields has been with us now for the best part of a decade. And, the SWR framework, applied correctly, continues to hold up rather robustly.

← Previous Timelineapp partners with Sanlam to join their series of Adviser Insight events
Next → Insights from the latest Retirement income data since the introduction of pension freedoms.