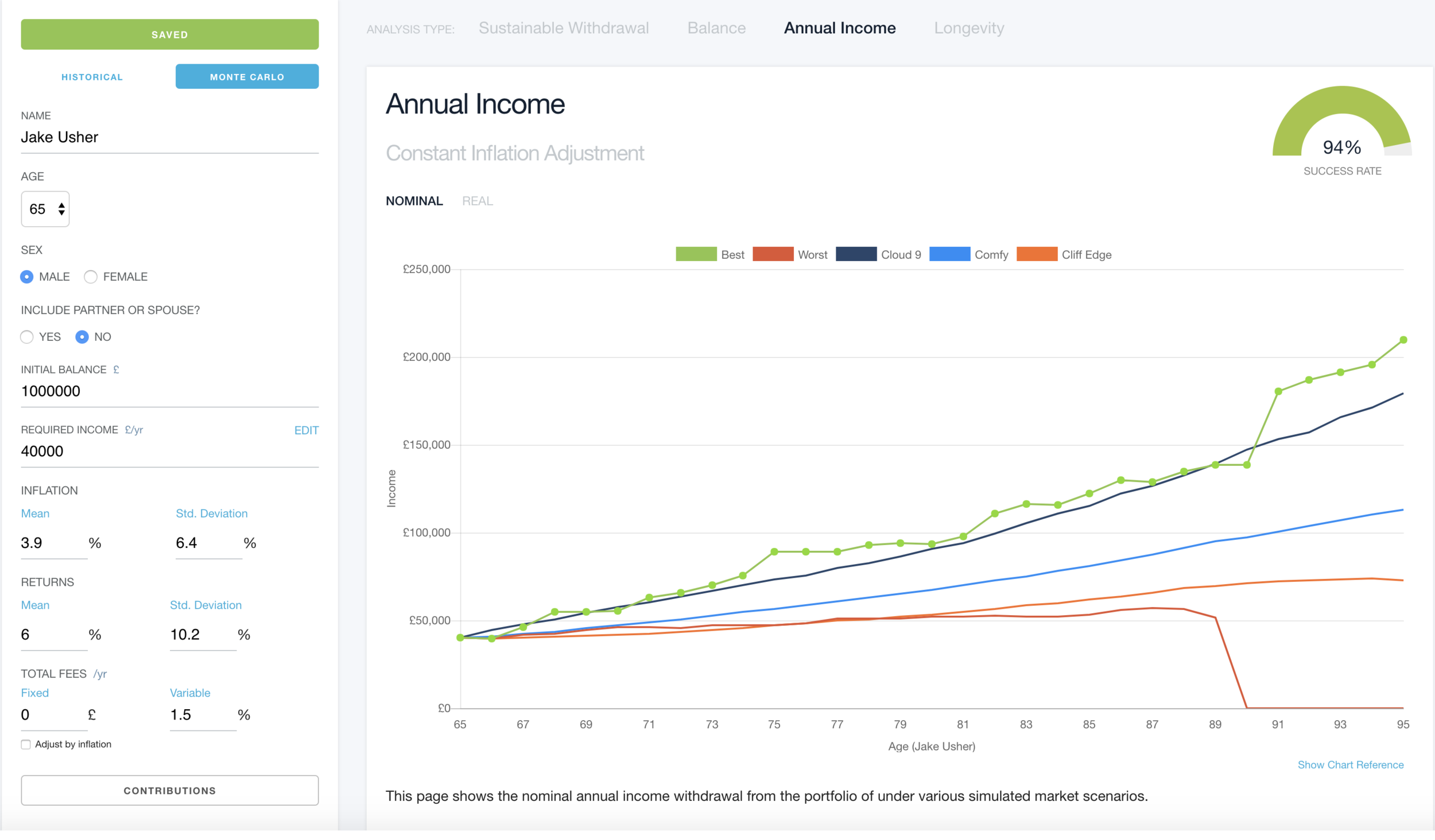 With this new feature, users can see how a given withdrawal strategy fares using Monte Carlo simulations, as well as under historical scenarios.

Abraham Okusanya, founder of Timeline said ‘while we believe that historical data over 117+ years is the most objective way to illustrate asset class behaviour, we understand that some users may want to test the withdrawal strategies based on their return expectation. So, we said knock yourself out!’

With this new feature, advisers can not only backtest a withdrawal strategy using 117+ years of capital market data, but they can also test their forward-looking expected return for the capital markets.

The Monte Carlo analysis enables users to test how a withdrawal strategy might fare under a wide range of market conditions by simulating sequences of random portfolio return. The model is parameterised to simulate returns from a lognormal distribution that matches the behaviour of the portfolio. The user is required to input their portfolio’s expected return, inflation rate and corresponding standard deviation and software will then produce results for the selected strategy based on 1,000 Monte Carlo simulations.

Extensive historical data takes financial planning out of the realm of the “theoretical” into the world of “empirical” because it’s based on observed behaviour of asset classes. This frees a financial planner from having to second guess how asset classes are going to behave in the future.

The main criticism of the historical model is that there aren’t enough scenarios in history to account for the wide range of possible outcomes. Some periods overlap and aren’t entirely independent of each other. Also, global markets are more complicated today than they’ve ever been and returns could be worse in the future.

Monte Carlo attempts to overcome the limitations of historical data by generating scenarios that we’ve never seen before. The practical relevance for Monte Carlo is that it enables us to explore scenarios that have never happened before. But Monte Carlo simulations have their own weaknesses. The chief one is that returns in any one year are entirely independent of previous years. The implication is that Monte Carlo analysis tends to overstate tail risk, compared to the actual historical worst case. This is because Monte Carlo simulations don’t account for mean reversion, which is a key characteristic of most asset classes.

As Derek Tharp, a financial adviser and PhD student in financial planning notes, ‘whether the prior year was flat, saw a slight increase, or a raging bull market, Monte Carlo analysis assumes that the odds of a bear market decline the following year are exactly the same. And the odds of a subsequent decline in the following years also remains exactly the same, regardless of whether it would be the first or eighth consecutive year of a decline!

Timeline is the only software that enables advisers to compare their withdrawal strategies with both historical and Monte Carlo Simulation at the click of a button!

Used by planners in seven countries including the UK, US, Canada and Australia, Timeline is the only software that enables financial planners to illustrate withdrawal strategies with both Monte Carlo and extensive historical data at the click of the button!

For a detailed discussion of the strengths and weaknesses of historical and Monte Carlo models, please see:

Timeline also recently added a new CPI minus X% inflation rule. This allows the user to illustrate a strategy where withdrawals are adjusted for less than CPI. For instance, CPI minus 1% will mean that if inflation is 5% in any given year, withdrawal is adjusted by 4%.

Research by Morningstar’s David Blanchett, CFA suggests that expenses in retirement tend to change by around CPI-1%. Now you can illustrate that to clients!

Hope you like the new features. Let us know what you think!

← Previous Timeline Goes to Chicago!
Next → Ratcheting Rule: Mitigating the risk of dying with too much money